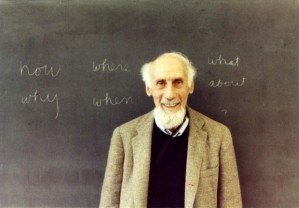 These poems certainly elicit skepticism, but they are more than simple conceptual or design exercises. They have an oddly effective way of opening up. This is the sort of art you think you could easily make, but when you sit down to it, you make something of horribly poorer quality. Artful elimination requires a deeply tuned dedication, a kind of mental conditioning. This is how John Beer—former assistant to Lax and editor of this collection—roughly describes it in his wonderful introduction: during the writing of these poems, Lax led a spare, if not ascetic life on the Greek islands, handwriting notebooks worth of work—several poems a day—from which he would later select and typeset only the very best “worthy of preservation.”